On March 20, when the 2016 professional baseball season was about to start, SK Wyverns, a Korean Baseball club introduced a new electronic display board dubbed “Big Board” at Incheon SK Happy Dream Park before the exhibition game. The “Big Board” is a SMART Signage (digital billboard) system and boasts a breathtaking size (63.398m wide, 17.962m, total area of 1,138.75㎡ ). The introduction of the “Big Board” gave Incheon SK Happy Dream Park the title of “Having the World’s Largest Electronic Display Board,”* a record that previously belonged to the Seattle Mariners in the Major League. The screen is equivalent to 3 basketball courts in size.

As the Korean baseball league surpassed the six-million mark in attendance for the eighth year running, each baseball club is trying harder than ever to attract more spectators through aggressive marketing activities based on expanded stadium infrastructure. Incheon SK Happy Dream Park wanted to receive a lot of attention for installing the world’s largest electronic display board in the stadium, setting a milestone in the history of the Korean baseball league as well as providing clear visibility and spectators satisfaction.

The world’s largest electronic display board in Incheon SK Happy Dream Park was completed with Samsung SMART LED Signage. It is expected that the “Big Board” made of Samsung SMART LED Signage will support the so-called “Fan-centered Paradigm,” Which the SK Wyverns recently announced. The “Big Board” is the best option to realize “Real Sportainment” with the slogan “This is Really Crazy!” and believed to help provide services and two-way communication with spectators across diverse content. This began with the association with the largest “Big Board” and “PLAY With,” an application for the SK Wyverns. As a result of “PLAY With” initiative, spectators have been able to send support messages for the players and participate in events through. They can experience various “Sportainement” services like getting information about the game, players, stadium and joining events or games. A world in which information and communication technologies are applied to baseball games. Now, spectators can enjoy baseball with vivid pictures through SMART LED Signage. 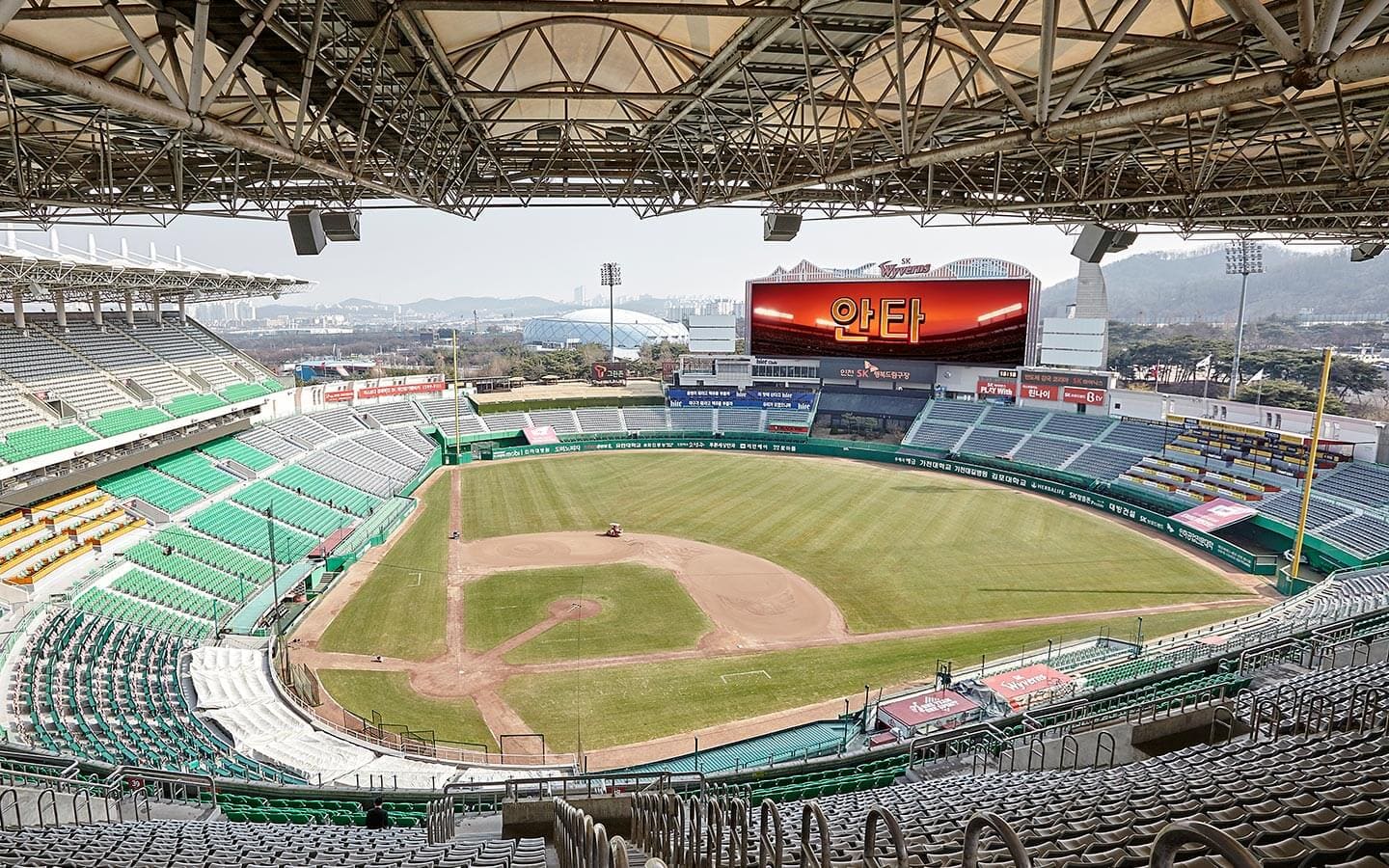 One of the biggest strengths of Samsung SMART LED Signage are crystal clear images that make viewers feel like they are watching the real thing. The calibration technology has been applied to realize actual colors, increasing visibility. Since the beginning of the 2016 regular season, spectators on outfield seats have been able to see an electronic display board without visual interruption. In particular, the features of automatic color contrast set-up, color calibration, and 4-level upscaling in Samsung SMART LED Signage help to realize clear and accurate images, which allow spectators to be more engaged in the game. Samsung SMART Signage with high definition (high quality, high-class LED) boasts a longer product life compared to other products under the same conditions. Plus, the thermal structure has been strengthened and the cabinet with a special design has also been applied. Its strong durability allow for the use of the product for seven days in a row and up to 100,000 hours. Samsung SMART LED Signage allows for the realization of a giant bezel-less display, which has helped to realize “the world’s largest electronic display board” in Incheon SK Happy Dream Park. The bezel-less display can be installed in a customized way in accordance with the space and purpose. Samsung SMART LED Signage is suited for various businesses, like sports stadiums, restaurants, transportation, outdoor billboards. It can be installed anywhere, whether outdoors or indoors, in any shape or size. 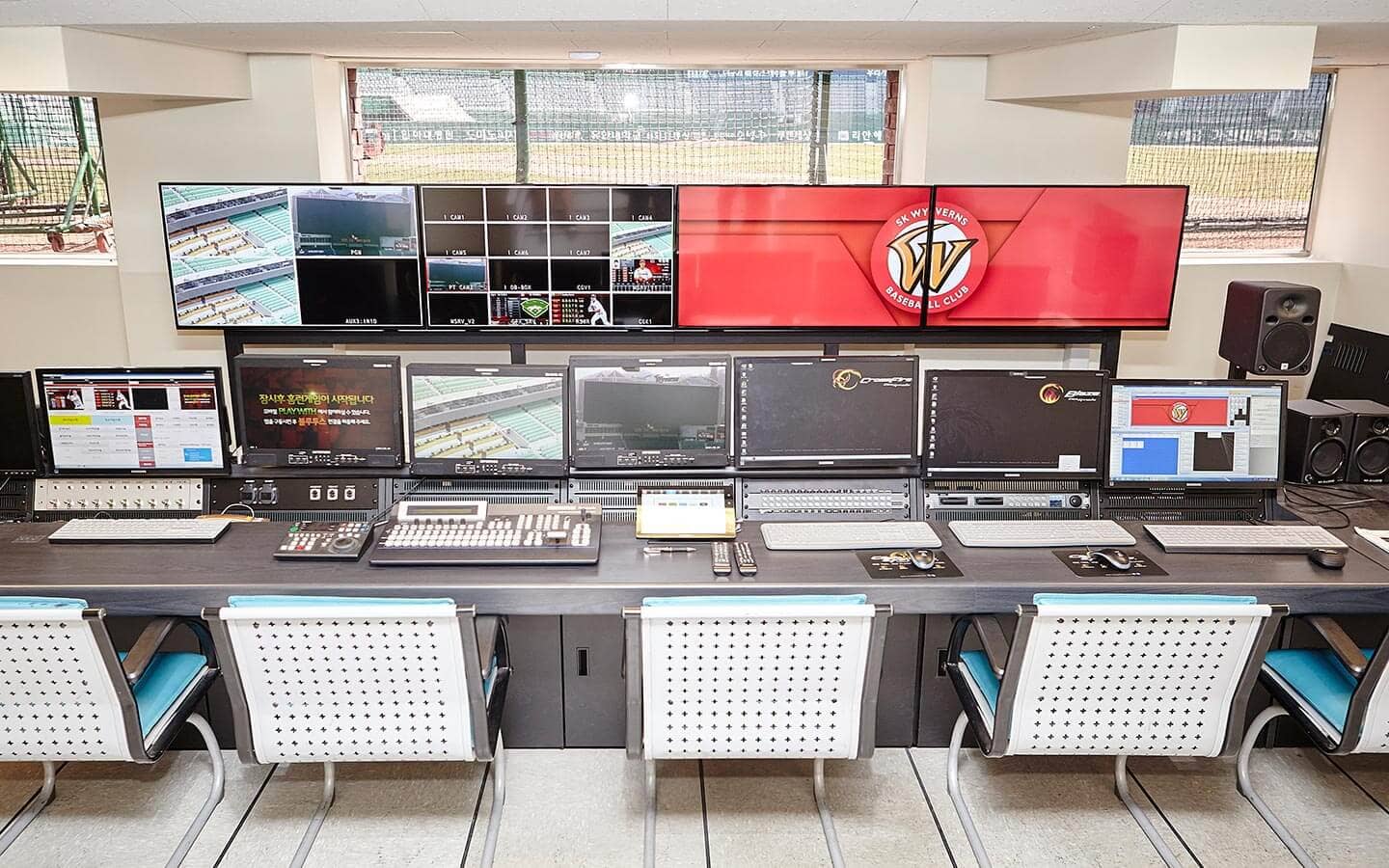 Offering from system planning to development, realization, management and maintenance

The Big Board, which stands as if it looks down at the ground as a whole, is being controlled by managers in the control room in the first basement level. Not only was the world’s largest display board realized by Samsung SMART LED Signage, but it is also monitored and managed through the technology and solution of Samsung SMART Signage. Four Samsung SMART Signages (LH40DBEPLGA) and six Samsung monitors are installed in the control room, while the Samsung PC is installed in the record room. 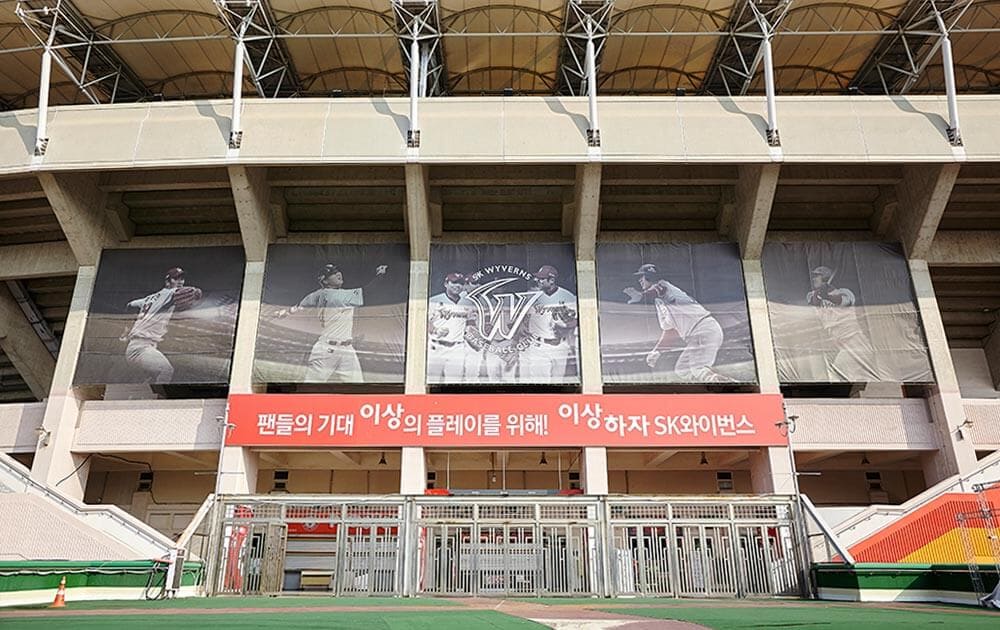 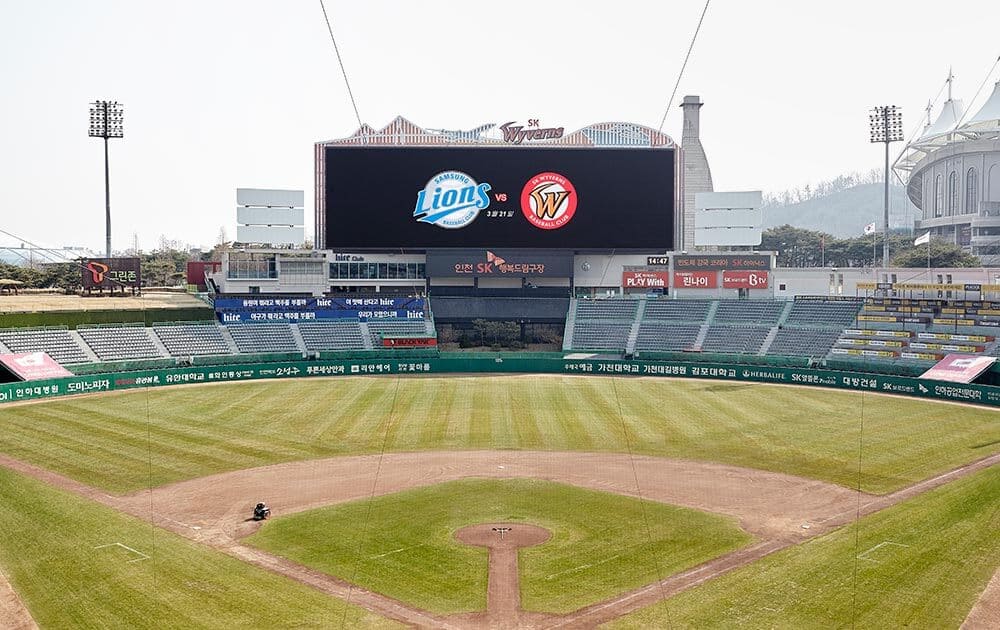 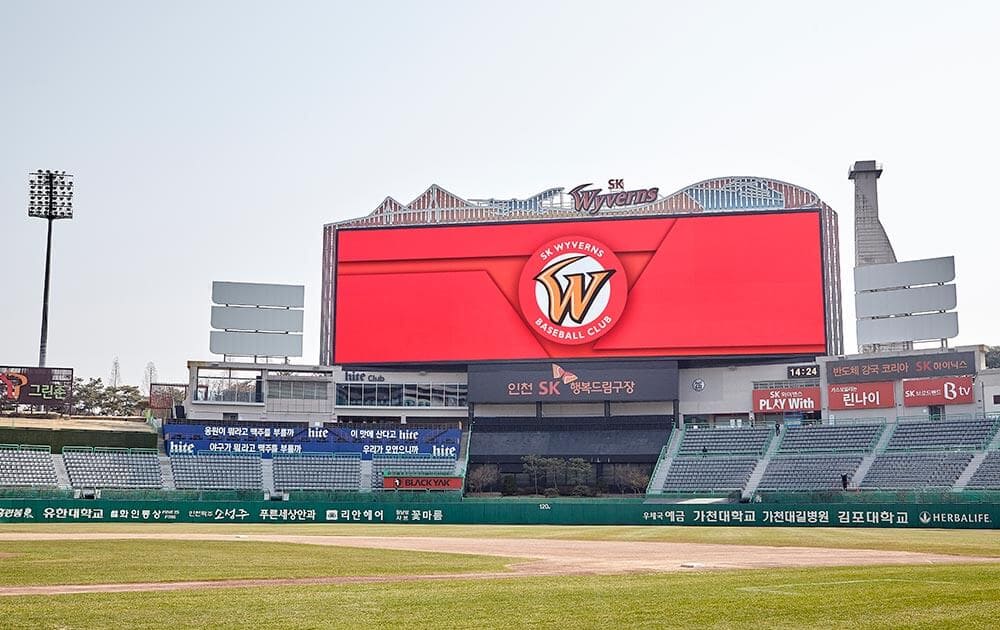 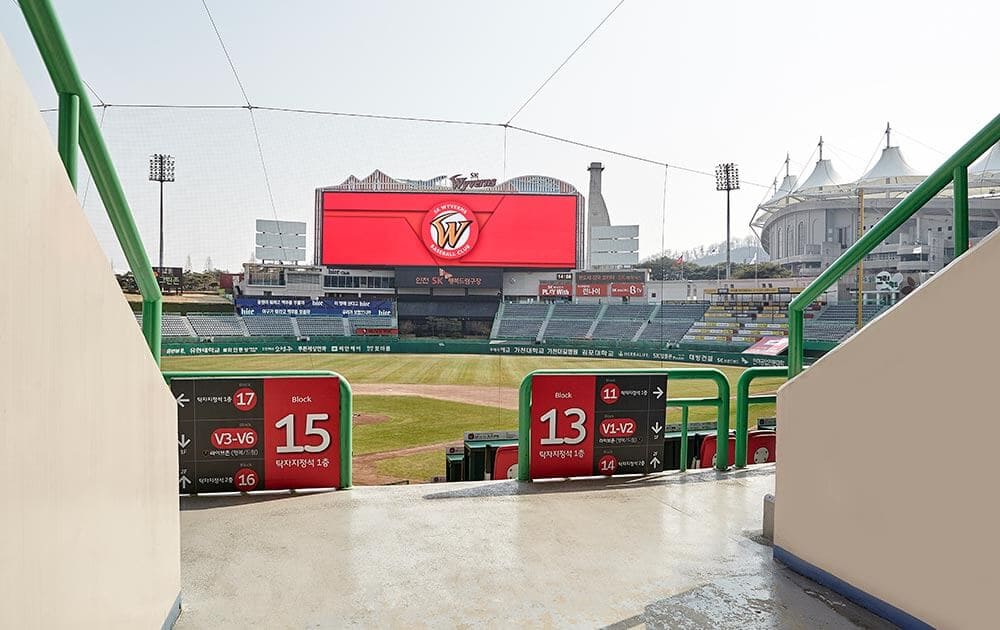 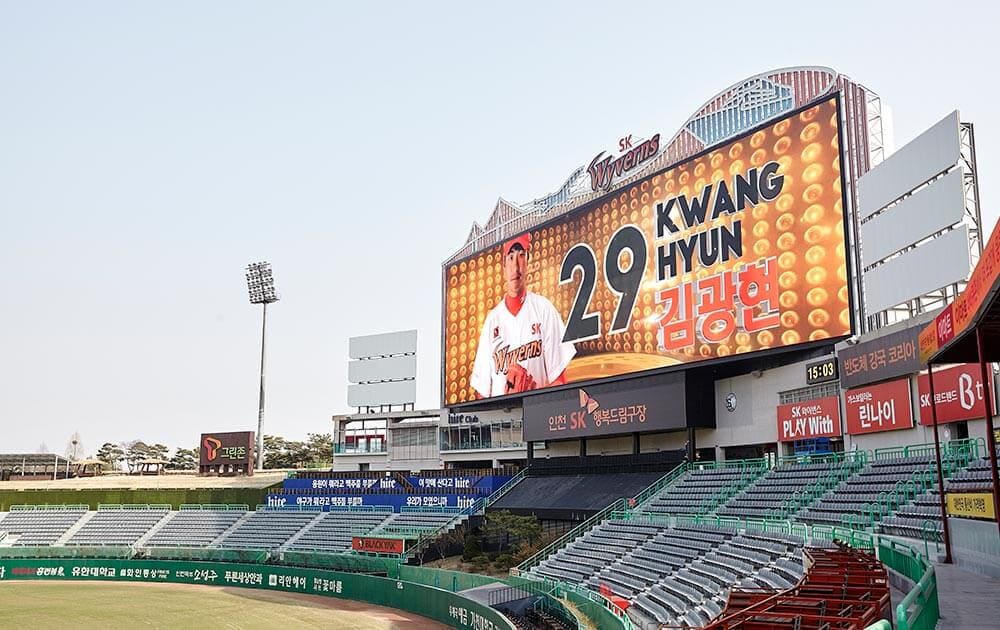 Viewers feel like they are watching the real thing

The electronic display board plays an important role not just in the baseball stadium but also in all sports stadium. The electronic display board is used in various ways to show scores and customized information at the right time; help communicate with spectators; and promote brands. “I feel like I am watching the game through a smart TV at home. It is breathtaking because everything is big and vivid on the display,” said a spectator in Incheon SK Happy Dream Park. Officials from the SK Wyverns noticed a positive response from spectators, and hope that the Big Board would help attract attention from advertisers. The Big Board, made of Samsung SMART LED Signage in ultra-high definition, has become the face of Incheon SK Happy Dream Park.